5 Ways Michael Scott was a Champion for the Employee Experience

Michael Scott of NBC’s The Office was arguably one of the most memorable television characters of the 21st century. Despite his outrageous antics and questionable in-office jokes, few can dispute the fact that above all, he wanted his employees to love coming to work. Cozy up with an espresso at the Café Disco, and enjoy these five ways Michael Scott championed the employee experience.

1. He promoted bringing your whole self to work.

Despite his shaky beginnings as a manager trying to navigate the waters of diversity and inclusion, Michael ultimately became a major advocate for his employees’ unique identities. Whether it was encouraging Ryan through business school, motivating Pam during her transition to a working mother, or well, embracing Dwight’s lifestyle in general, he made sure to connect to his employees as individuals. As we know, employees who feel comfortable bringing their whole selves to work perform better, stay longer, and are statistically more engaged.

Crossing the line: Everything about the episode “Diversity Day.”

2. He made a point to support his team members outside of the office.

Certainly not every employee wants to spend time with their coworkers outside of normal working hours, but in the case of Michael Scott’s team, any time an employee invited him or their coworkers to attend an after-hours event, he was there in full force. Pam’s art show, Kelly’s Diwali celebration, and Andy’s play, for example, all had significance for each of them, and Michael made sure to be there. Managers certainly don’t have to prioritize after work events to be good leaders, but for some employees, that level of interest makes all the difference in their experience.

Crossing the line: Michael frequently inserted himself into situations outside of work where he wasn't welcome. Like the time he insisted on standing with Phyllis and Bob Vance's groomsmen and announcing the couple prematurely during their wedding ceremony.

3. He avoided death by PowerPoint.

Say what you will about Michael Scott’s leadership style, he sure didn’t hold boring meetings. Despite some of his crazier ideas, nearly all of his meetings involved significant employee involvement, open brainstorming, and multiple learning styles. There were never stale slides or monotone lecturing (we're actually not sure he ever learned how to use PowerPoint). As we’ve learned, one of the biggest mistakes leaders can make is not asking for employee opinions, and Michael certainly shows time and time again, he craves outside input.

Crossing the line: Seemingly daily all-staff meetings where little to nothing was accomplished. "Prison Mike," anyone? 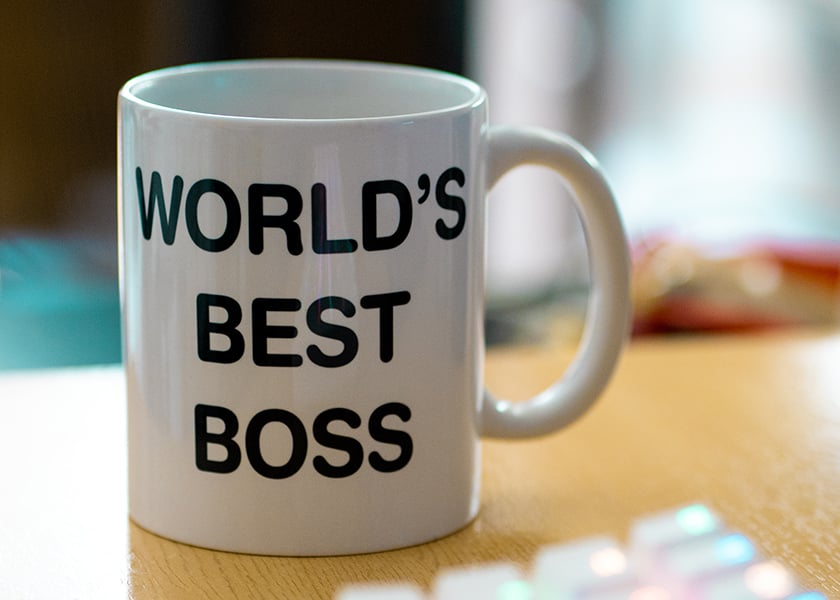 No one had more pride in their company than Michael (except maybe Dwight). As a leader, it’s so important to make your meaning in your work known. A surefire way to disengage your employees is to show apathy for your work or for your organization. Times aren’t always going to be great, and for most managers, there will be plenty of opportunities to lead through hardship. But it’s in those moments leaders prove their resilience to their employees.

5. When possible, he connected his employees to work they wanted to do.

In a small office without much room for upward mobility, it can be very difficult to link employees to new projects or roles they are interested in. Over the course of the show, most characters did stay in their roles; however, when presented with the opportunity, Michael did advocate for his employees’ professional ambitions. For example, when the Michael Scott Paper Company sold to Dunder Mifflin, Michael insisted Pam come back as a salesperson, not as receptionist. Michael knew Dwight craved leadership opportunities, so when Ryan came on as a new salesman, he gave Dwight the opportunity to train him in. As we know, the best way to empower employees is to develop them, and this is particularly important in today’s workforce for Millennials.

Crossing the line: Hiring Dwight as a private investigator on company time.

Michael Scott was under no circumstances a perfect people leader (he could've definitely avoided some less-than-ideal situations by partnering better with Toby, for example) But one thing he did expertly is champion the employee experience. He sincerely cared about his employees as individuals, both in and outside of work. He kept meetings and team gatherings interesting. He was a fierce advocate for his organization. And he gave his employees the challenges they craved.

Everything You Need to Know About Employee Engagement Software